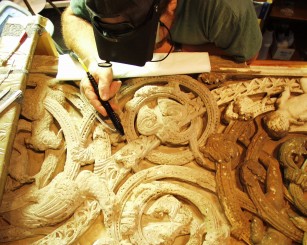 BAS-RELIEFS ON THE ARCHITRAVE OF THE SS. SEPULCHRE IN JERUSALEM

This intervention involves two marble slabs from Asia Minor, reused during the era of the crusades for decorating the architraves of the Holy Sepulchre. Though the workshop where they were created is uncertain, they were probably crafted by a group of French and Palestine masters sometime around the year 1160. The first depicts a scene from the life of Christ, the second, allegories of the capital sins and virtues. In 1348 a document mentions that the bas-reliefs still had a natural marble colour which therefore dates the probable conservation operations that gave rise to the thick brown oxalate patina to a later period – though nobody knows exactly when. After the earthquake in 1927 and the consequent loss of fragments, they were transported to the Rockfeller Museum, where over the next decades they were subjected to various restoration attempts, logically limited because of the scarce possibilities and knowledge of the restorers at that time.
The extremely precarious condition of the bas-reliefs, with extensive and ingrained deterioration of the marble support requested a careful restoration work.

Within the framework of the restoration works of the bas-reliefs of the portals of the Holy Sepulchre of Jerusalem, El.En. S.p.A. has provided the Israel Antiquity Authorities with a laser to be used in the operations for cleaning the bas-reliefs from the deterioration and substances used in previous restoration works. The conservation and cleaning operations were carried out in part with traditional mechanical methods, while the laser was mainly used  on the parts where the original modelling has been lost, therefore making it extremely difficult to operate with traditional methods without causing the detaching of marble crystals. This method also allowed the cleaning intervention before consolidation with chemical products.